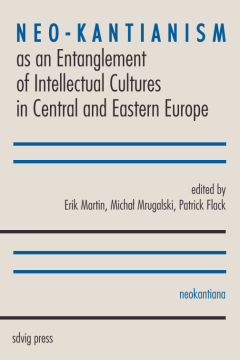 Neo-Kantian philosophy as method and network

1The present volume, which constitutes the proceedings of the eponymous conference held in May 2019 at the Polish Institute in Berlin, offers a striking insight into the profoundly networked forms and practices of Neo-Kantian philosophy. Adopting an original perspective on the movement, the materials gathered here firmly establish that the scope and impact of Neo-Kantianism in the landscape of European culture and ideas can only be properly understood if one takes into account not just its main German “schools” (Marburg, Baden) but also its inter-disciplinary and cross-cultural dissemination in other intellectual contexts, not least in Poland and Russia.1 Conversely, this volume also underscores how the broad and diverse influence exerted by Neo-Kantian philosophy in its relatively long period of dominance constitutes a crucial element in the dynamics and evolution of European ideas and intellectual cultures, in particular the fundamental methodological break with the positivist traditions of the 19th century and the slow rise of “new” human sciences or Geisteswissenschaften (anthropology, art theory, cultural studies, linguistics, literary theory, sociology, etc.) around 1900.

2On a more cautious note, it is worth underlining that the present volume does not purport to offer a systematic defence of these two arguments regarding both the networked nature of Neo-Kantian philosophy and its pivotal role in the reconfiguration of science and knowledge at the turn of the 20th century. Notwithstanding a score of interesting elements on the specific topics highlighted by each paper, the present volume provides rather a first outline, a) establishing what one could call the “frame of relevance” of Neo-Kantian philosophy and b) underlining the importance of analysing it specifically in terms of a multilateral, multipolar network. Most of the work towards contextualising and reassessing the networked role of Neo-Kantianism in the European history of ideas remains to be done. As such, this volume can be considered as a first step in the exploration and demonstration of a general hypothesis.

3That hypothesis itself, however, is the result of a protracted and already mature reflection, which was progressively initiated in Tübingen and Moscow in 2013 thanks to multiple discussions between the editors over the status of Neo-Kantian philosophy and, specifically, its role in the development of “Russian Theory” (cf. Zenkin 2004).

4The starting point of our discussions, and the basis of our future hypothesis on the pivotal European role of Neo-Kantianism was a strange discrepancy we noticed in the common treatment of the German sources of Russian Formalism. On the one hand, we found a wide recognition and very detailed studies of the Formalists’ psychological sources (cf. SDmitriev 2002, vetlikova 2005, Tchougounnikov & Romand 2009), and indeed of their inspiration in German philology (Humboldt, Goethe) or formalist art history (Wöllflin) or even aesthetics (Hanslick, Worringer). On the other hand, their debt to German philosophy has often been acknowledged only very summarily and dismissed as being of at most secondary interest given the Russian Formalists’ own distrust of philosophy as a discipline (cf. Hansen-Löve 1978 on the reception of phenomenology, Depretto 2009 on the Formalists’ philosophical background). Neo-Kantianism itself was often mentioned as belonging to the Zeitgeist (Erlich 1955), and thus constituting a sort of philosophical background to Russian Formalism, but its specific impact was not analysed by any of the leading specialists whether within or outside Russia.

5Speculating on the possible causes of this somewhat ambivalent neglect (as mentioned, the spectral presence of Neo-Kantianism as a philosophical backdrop to Russian Formalism is widely recognised), we noticed that the recognition of the impact of Neo-Kantian philosophy beyond the bounds of German academic philosophy (and even within these bounds) has tended to be very limited. Many of the direct successors to Neo-Kantian philosophy, whether its most obvious (phenomenology) or most antagonistic (logical positivism, critical theory), tended to neuter its importance and to function more as replacements, that then cast their long shadow over it. Thus, to take a few examples, the extent of Husserl’s debt to Natorp is usually papered over, and the same applies to Heidegger’s links to Emil Lask (cf. Kisiel 1995), or indeed to Cassirer (cf. Rastier 2018); Carnap’s links to Cohen are almost completely neglected (cf. Damböck 2017), and the critical theorists, Adorno first among them, had of course only disdain for their old “masters”.

6The same trend is to be observed beyond the bounds of philosophy: in anthropology, the links of Lévi-Strauss with Cassirer’s philosophy of forms, in linguistics, the Neo-Kantian undertones of the Prague and Copenhagen School, and in sociology the many ties of Neo-Kantian social thought with thinkers such as Max Weber, have generally been overlooked — or at least never considered globally, as the symptoms of the general historical role played by Neo-Kantian philosophy. This absence of Neo-Kantianism in the inter-disciplinary networks of European science is revealed perhaps most clearly in the excellent, large-scale reconstruction of the history of the human sciences in the late 19th and early 20th centuries offered by John Goldsmith and Bernard Laks in Battle in the Mind Fields (2019), whose only obvious lacuna is its almost complete exclusion of Neo-Kantianism and its systematic, multilateral ties with other mainstream traditions such as Brentanian and Gestalt psychology, phenomenology, structural linguistics, or logical positivism. In a similar way, Neo-Kantianism is conspicuously absent of most of the canonical work in the theory of cultural transfers (Espagne & Werner 1998; Espagne 1999; Werner & Zimmermann 2002) ) and has never been explicitly treated, by contrast for example with phenomenology (Spiegelberg 1960) or structuralism (Albrecht 2007), as an international movement. Classic studies of Neo-Kantianism (Köhnke 1986, Beiser 2014) are usually obsessed rather with the logic of its development in 19th century Germany, or with the analysis of its leading figures (Cohen, Natorp, Cassirer). The slowly increasing number of studies that do take a decidedly intercultural and interdisciplinary perspective, on the other hand (Dmitrieva 2007, Plotnikov 2005, Grifceva & Dmitrieva 2010, Loft 2021), have brought up an extremely dense and interesting network of exchanges and plausible channels of influences, interferences and receptions.

7This triple diagnosis of a) a (predominantly) monolithical focus on Neo-Kantianism as a German academic institution and b) a neglect of its systematic ties with other disciplines, and c) the presence of significant and undisputable examples of precisely such ties, in particular with Russia (Belyj, Pasternak) and Poland (Warsaw School of the History of Ideas) formed the basis of our resulting hypothesis, namely that Neo-Kantianism had to be studied not only as a philosophical method, but as a network.

8To implement and test this hypothesis, we decided to proceed along two separate avenues: the organisation of a conference with international experts of Neo-Kantianism, whom we enticed to take a network perspective on the movement on the one hand; the development of a digital project, www.neokantiana.org, on the other, with the aim of building an extensive database of Neo-Kantian philosophy and provide a factual, queriable basis for our networked interpretations. If anything, the preliminary results of both projects has been to show the extent to which we underestimated the potential connections and networks of Neo-Kantian philosophy, with the already mentioned paradoxical result that this volume in itself is proof enough of the systemic importance of Neo-Kantian philosophy to early 20th century European history of ideas, but that the work has only begun in assessing exactly how it was so. Additionally, we discovered that we are still lacking the proper methodological instruments, not only on a digital level, but on a heuristic one as well, to frame and interrogate the networks of Neo-Kantianism, a problem that Michał Mrugalski addresses in his prospective contribution to the volume.

9In summary, the present volume can be characterised both as a significant, mature result in its own right, the formulation and confirmation of the systemic, networked dimension of Neo-Kantianism and its heretofore neglect in the canonical historiography of 20th Century European thought. At the same time, it appears also only as a tentative and preliminary attempt to characterise that systemic dimension, providing snippets and pieces of evidence of bilateral exchanges, as a step to an unifying theory, or a synoptical map.